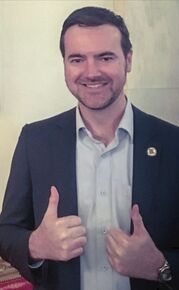 President
​Jason P. Clark
Jason Clark is President of the Log Cabin Republicans of San Francisco, a post he also held in 2015-2016. A lifelong Republican, Mr. Clark has been active in Republican politics for over 15 years. Most recently, Mr. Clark serves on the Executive Board of the California Republican Party, as the Bay Area Regional Vice Chair, representing the nearly 500,000 Republicans in the Bay Area. From 2016-2019, Mr. Clark was the Chairman of the San Francisco Republican Party. In addition to representing the City's 31,000 Republican voters, Mr. Clark recruited nearly a dozen candidates for local and state office, spearheaded voter outreach and education, and raised over $200,000 for the local party. Mr. Clark has also made over 100 media appearances including appearing on Lou Dobbs and Mornings with Maria Bartiromo. Mr. Clark is also the Immediate Past Chairman of the Log Cabin Republicans of California.

Vice-President
​Edward Bate
Edward is from San Francisco and has been active in the chapter for the last 8 years.  He has enjoyed the many discussions at the monthly meetings that affect the local area and elections. He looks forward to sharing his enthusiasm and welcomes new members.
Treasurer
​Larry Lacko
Secretary (Currently an open position)

Membership/Outreach
​ James Servantes
​James lives and works in San Francisco and has been a life-long Republican.  He is admin for our Website, Facebook, Twitter and Instagram pages. You can reach him directly at: JamesServantes@sflogcabin.org

Member-at-Large
​ Jon Landucci
​Landucci is a native of San Francisco and was involved with Silicon Valley​ Log Cabin Republicans. He coordinated our Log Cabin Picnic in May 2022 in Golden Gate Park.

​Immediate Past President  Christian Foster
​​​Christian is semi-retired and President of an international trade and national security affairs consulting firm in San Francisco.  Previously he served over 30 years in the federal government with the U.S. State Department and several other federal international affairs agencies.  A native of Ohio, he graduated with a BS and MA from Georgetown University in Washington, DC.

Immediate Past President
​Paul Cummings
Paul D. Cummings is the current chairperson of the Volunteer Organizations Committee of the California Republican Party.  He is the first openly gay man to chair a state party standing committee.  In 2007, he became chairman of the Alameda County Republican Party, the first openly gay man to hold such a position in California.  He has served multiple terms as secretary on the board of Log Cabin Republicans of California.  He is a retired U.S. Navy Surface Warfare Officer, holds a Bachelor of Science in Public Administration from the University of Southern California, where he has served on the Board of Governors of the university’s General Alumni Association, and a Masters of Business Administration from St. Mary’s College of California.